Tyler Perry has just dropped a first look at his debut feature for Netflix. It’s the new movie he wrote and directed titled ‘A Fall From Grace,’ and it’s slated to come out on Jan. 17. From EURweb: Footage from the new trailer shows Crystal Fox (“The Have and the Have Nots”) as Grace Waters, a recent…

MoNique released an audio clip of Tyler Perry’s two hour long private conversation with she and her Husband Sidney, which validates her claims as he apologizes, and gives understanding for his part in their “Black Balled” experience… The post Mo’Nique Releases Tyler Perry Audio Apologizing And Validating Her Claims appeared first on The BLACK Media.

Drama, intrigue, faith and a whole lot of laughter are just some of what David and Tamela Mann fans can expect on their new BET original seriesIt’s A Mann’s World, which premieres Wednesday, January 14, 2015.
The Manns have become fixtures in Tyler Perry’s hilarious productions from the stage and television to the big screen. Their inspired delivery of comedy and gospel music has delighted audiences in a string of Madea plays and movies, as well as the television series Meet The Browns and House of Payne.
This original one-hour BET reality series is an edgy and fun multigenerational family affair. The show will reveal generous and even controversial interactions between David and Tamela, their four grown children, eight grandchildren and a slew of friends, extended family and other characters that enrich the lives of the entertainment power couple.  With recording careers, touring, filming and managing an…

“THE HAVES AND THE HAVE NOTS” 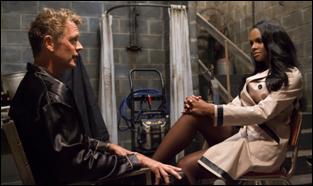 Los Angeles – OWN: Oprah Winfrey Network’s popular television drama, “The Haves and the Have Nots,” from Tyler Perry, returns Tuesday, January 6 at 9 p.m. ET/PT for an all-new, drama-filled second season.

The network’s highest-rated series, “The Haves and Have Nots” follows the complicated dynamic between the rich and powerful Cryer and Harrington families and the Cryers’ hired help, including the less fortunate Young family.

In the new season, the devastating consequences of deception and reckless behavior come to fruition, as both the Cryer and Harrington families face personal tragedies that threaten their privileged status.

Leakgate is the talk of the town in Hollywood and around the country.

The leaked emails from Sony Pictures is causing a whole lot of of consternation for the movie executives whose private conversations were made public.

In particular the emails involving jokes about the kinds of movies President Obama would be interested in seeing are drawing the most criticism.

The email exchange between movie producer Scott Rudin and Sony co-chair Amy Pascal were initially deemed as “racially insensitive” by writers who reported on them.

But Shonda Rhimes of Scandal fame flat out called the email exchanges racist.

In a tweet Rhimes wrote, “Calling Sony comments “racially insensitive remarks” instead of “racist”? U can put a cherry on a pile of Sh*t but it don’t make it a sundae.”

That’s about as blunt as one can get on the subject.

Recently, one of Tyler Perry‘s employees caused some havoc at his film studio by evading security and forced his way to Perry’s 2nd floor executive suite to meet the entertainment mogul.

The end result was Perry filing for a protective order on Monday against Joshua Sole, a 27-year-old resident of Dunwoody (Georgia) who was booked last Friday (10-31-14) into the county jail for criminal trespass at Tyler Perry Studios.

Now, as part of his frequent updates to his fans via his mailing list, Perry is speaking out and letting folks know how the situation went down from his perspective:

So, I’m sitting at my house in LA, minding my own business, and I get a call from the president of my studio. He called me to tell me that there was an employee at the studio who was behaving strangely. I asked who it was and he…

Tyler Perry didn’t waste any time filing a protective order against a former employee that he believes is stalking him.

According to Atlanta Police, Joshua Sole was arrested an charged with criminal trespassing at Tyler Perry Studios on Halloween morning.

BLB – BLAST FROM THE PAST